Chip checks in with Evan Purmort one year after taking over as president of Central Insurance.
Published: June 21, 2021 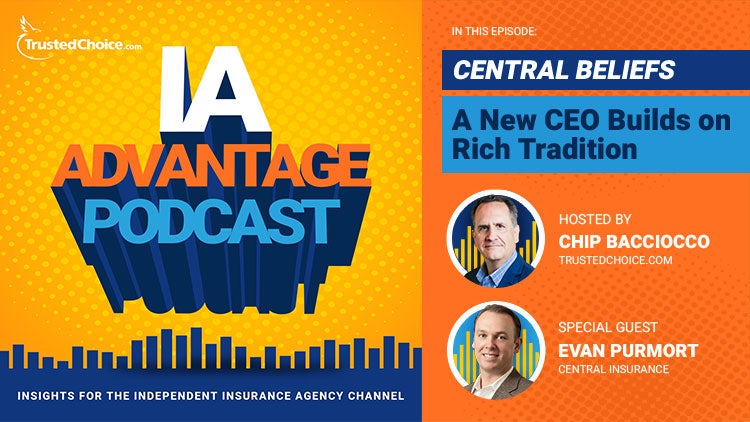 This podcast was almost a year in the making. It’s not often that a historic mutual insurer like Central Insurance welcomes a new leader, especially one that isn’t yet 40 years old.

On May 13, 2020, Evan Purmort took over the reins of the 145-year old company right in the midst of a global pandemic. On top of that, the company was tackling some large-scale initiatives, including a major technology platform overhaul and a creative rebrand.

Chip checks in with Evan one year later to hear how it all went and what other new things are in store for this long-standing and widely-respected insurance company.

Become a Recommended Agent on TrustedChoice.com

In 1896 the insurance industry was changed forever. It’s the oldest, largest insurance and most influential insurance industry trade association in the world. Chip talks with the current and future chairs of the Independent Insurance Agents & Brokers of America...

It's a Beercast!  With big news and multiple things to celebrate, Chip sits down over beers with Reid Holzworth, CEO of IVANS, and co-founders of Ask Kodiak, Allan Egbert and Mike Albert to discuss their bold new plans for a better connected insurance industry. Find...

Wunderite: Putting the Wonder in Underwriting

Agents have more technology at their disposal than ever before. So why are so many still resorting to pen and paper? Find out in this episode when Chip speaks with startup insurtech founders, Peter MacDonald and Joe Schnare of Wunderite. For more information: Learn...

Why was the Trusted Choice national co-brand for independent agents created in the first place? In part 2 of this podcast mini-series, Chip talks candidly with current and past chairs of Trusted Choice for a little history lesson and an intriguing look ahead at the...

A New Chapter: Catching Up With Ryan Hanley

In this bonus episode, Chip checks in with digital marketing expert, former employee, and new agency owner, Ryan Hanley. As the world was coming to grips with an unprecedented pandemic last March, Ryan was launching a brand new agency. Crazy? Or crazy like a...

The latest Agent For The Future study reveals that high digital adopters grew 60% faster than low digital adopters. Chip sits down with Tyler Asher, President of Independent Agent Distribution at Liberty Mutual and Safeco Insurance, to learn more about the...

Going Bold: Behind the Scenes of the American Family + Bold Penguin Acquisition

Thousands of independent agents were surprised by this big news last month. The backstory behind this important merger of two leading IA tech providers is as interesting as the plan for moving forward. In this episode, Applied CEO Taylor Rhodes and EZLynx CEO...

Why Be a Trusted Choice Agent? Part 1

Did you know that Trusted Choice independent agents are 46% more likely to be recommended by consumers than other independent insurance agents? So what does it mean to be a "Trusted Choice" agent, anyhow? In part 1 of this mini-series, we talk with Kevin Brandt...

Going Digital: Why Agents Are Here to Stay

There may be bright skies ahead for the independent agent despite the profound pressures they've faced during the COVID crisis. In this IA Advantage Podcast, Kevin Kerridge shares how Hiscox’s quote and bind technology is keeping agents indispensable in the new...